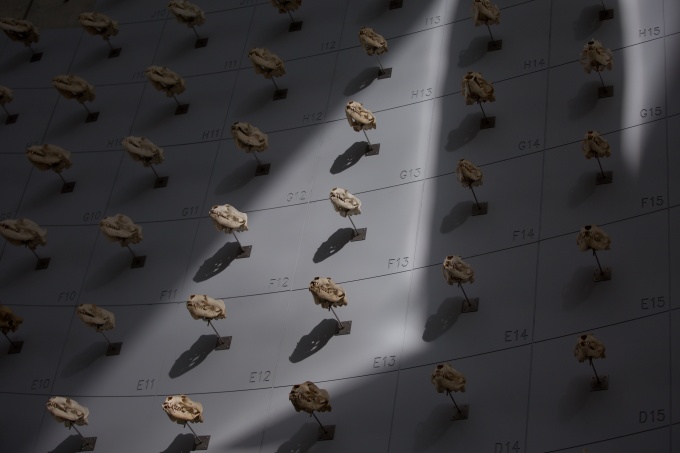 I am photographing the Global Climate Action Summit for a long-time client, but none of these photos really have anything to do with the summit or why I was at the California Academy of Sciences.  The only connection is I made these photographs while waiting for the people I was photographing to arrive.

For some reason this display of skulls (they are from seals I think) were quite interesting to me as I waited. I liked how the light raked across the skulls. Also for some reason the bottom photo reminds me of one of those map of the United States puzzles I used to love as a kid.

And then I saw Claude, an albino alligator. I have not been to the California Academy of Sciences since my kids were much younger. We were spoiled to live so close to such an amazing place, and probably did not go anywhere near as often as we should. If you are in San Francisco or planing to visit, you should go… well after you have seen the Susan Meiselas exhibit at the SF MOMA — then you can go to the Academy and stare down this amazing primeval creature.

This is just some random photo that was on my desktop. It is really late, I have been taking photos since 9 a.m. and I am getting rather slap happy.  Probably best to stop typing.