Yes, that photo is of me, I am probably eight or nine in that photo, most likely it was taken by my father, it is somewhere in Yosemite. I always have hated this photo, and did not understand why people always thought it was soooooo cute. To me, I can only see the mussed up hair, the filthy, unbuttoned shirt, and remember I really did not like climbing mountains, hiking, camping, boy scouts or pretty much anything my father and to a lesser extent my mother hoped I would liked. I can only see that forced smile, hiding the misery……

Or is it a forced smile? Was I miserable? or was that something I created in the years since to justify me not being able to be what others wanted me to be.

This photo is next to the photo of me on top of the mountain. It is my kids in Central Park, I was trying to recreate Eugene Smith’s “Walk To Paradise Garden.”   I realize it is not even close, but Smith’s photo always was how I imagined one should photograph one’s children, with the same intensity and passion one brings to professional work. But, once I had kids, twins no less, I realized that would not be possible, for me at least.

But, like the photo of me in Yosemite I have to ask myself, are they happy in this photo? They look happy, I remember them being happy, so they must have been, right? I have no idea if I was happy when I made this photo. I should have been, I think, why wouldn’t I be?

In the age of social media we see photos upon photos of people we know, and a lot of people we do not. For the most part, the usual exceptions are your art student friends who want to be ironic (I would include myself in this batch), people post things they think others will see as them being happy. And, that is wonderful, why would I want to look at a bunch of photos of my friends, friends of friends, relatives I have not spoken to in years, work people, and all those people I don’t know but somehow end up on my social media feeds, to look miserable, lonely, bored, or even just average. Sure there is a bit of schadenfreude in us all, but we tell ourselves that wonderful feeling of satisfaction at other’s misfortune is only directed to the truly deserving, like that guy who cut me off in traffic earlier this morning, HOW DARE SOMEONE SLIGHTLY DELAY ME FOR A FEW SECONDS. 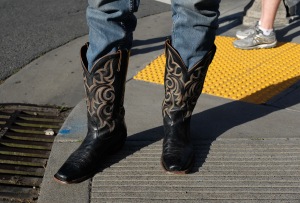 What was I thinking when I made this photo, and what were the people on the sidewalk thinking as I was making this photo?

Actually I do not really care that much about that, I wanted to make the photo and the guy wanted to show off his belt buckle and awesome boots.

All of this is distracting of what I need to be doing right now, editing photos from two shoots I had this weekend.

Think about that for a while.