As I am sure you all know Prom is, in the parlance of the youths, “No B.D.” You know, no B.D. Wong — this is a Bojack Horseman  reference and probably makes no sense to anyone other than myself, but I am the typist here, so deal — the famous actor of Mr. Robot, Law and Order, M Butterfly and a whole bunch of other stuff I am too lazy to look up, who also went to Lincoln High School. Which is also the school my kids attend, well not for very much longer, but more on that in a month or so — bittersweet references TK.

What does that have to do with anything? Not much, really. Mostly I use nonsensical humor to deflect any real emotions I have about my kids growing up, and by association my own Methuselah-ish age.

The kids went to prom Saturday and we had to do the usual getting ready stuff, Aurelia had a bunch of her friends come over to get ready. All of Leif’s friends were too cool (or is it awkward, hard to tell the difference) to get ready together and were getting ready somewhere else. 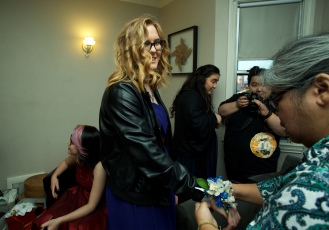 One of the mothers or aunts was really awesome, she made the kids corsages so we all had fun putting them on. Leif even got a flower for his jacket. It was quite sweet.

So what does a high school boy do when there is a room full of girls in his house, retreat to his room to play Led Zeppelin. I keep telling him the only Zeppelin song he can play is Immigrant Song because it has my name in one of the lines. 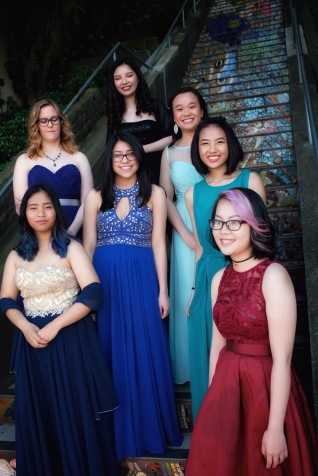 Then it was picture time, then off to the prom. I dropped off my kids and Aurelia’s friend Lisa (she has the really lavender streak in her hair, the other kids went with two other parents.

Like a good parent I went home and went to sleep until I get a call a bit after midnight to pick them up at Mel’s Diner at Mission and Fourth Streets, and bring money, for some reason they did not have enough.

Did they have fun? They said they did. Was it awkward? How could it not be? Was it awesome? Yes. Did I have a great time? You bet.